I'll take a break from the travel posts and the next one will be again linguistical.

One of the fascinating things is how different nations perceive time. Here is a small infogprahics of the greetings throughout the day in the languages I speak: 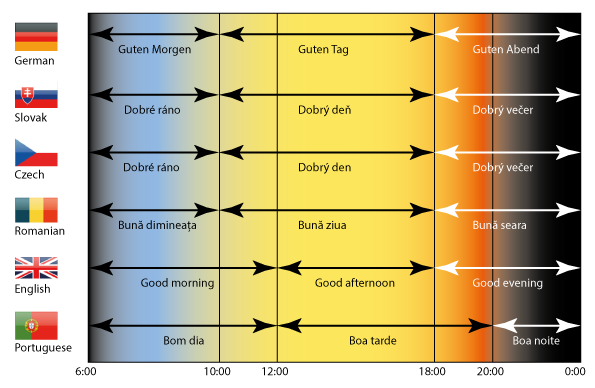 Portuguese is for me the most interesting case. They do greet each other with "Good day", but only in the morning. Then the afternoon is "tarde" (= "late"). And they strictly keep to this distinction. If you say "Bom dia" after 2 pm, they look at you very strangely. Evening greeting is "Boa noite" (= "Good night"), but they use it only after dark, i.e. a bit later than afore mentioned languages. And yes, it is a greeting :) This one is the hardest to get used to, I feel like I am sending the people to sleep already. Generally, all the portuguese greetings from the picture above can also be used when saying goodbye.

Why the difference? Well, the Portuguese do have it a bit shifted. They get up a bit later and also the best time to go out on Friday is 11 pm. That is the time of leaving for a pub, not of the subsequent way to a club. Another example: The Portuguese word for lunch is "almoço" and the breakfast does not even have a proper name of its own, it is just "pequeno almoço". On the other hand, they have a special word for late dinner.

Spain is also famous for its shifted biorythm. But there it has more reasons. Except for the heat during the noon, it is also their "wrong" time zone. Spain uses the central-european time, even though it lies way more to the west. Franco wanted to please Hitler and that is why the sun sets quite soon in Spain. Portugal is more realistic when it comes to timezones. I just need to get used to "Boa noite".

Any thoughts on this? Leave a comment.
Posted by Adam Libuša at 14:02